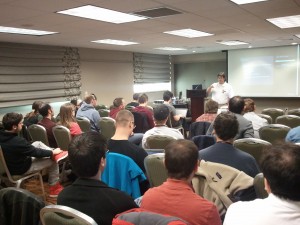 First and foremost a big Thank You! to our Xen Day presenters: Patrick F. Wilbur, Steven Maresca, and Josh West. What a great and diversely talented team they were. I look forward to working with you all again soon.
You can read their bios on the Xen Day page, but let me tell you a bit about these guys and what makes them special. Pat lead off the day by presenting a condensed version of a Xen and XCP tutorial that is typically a day long tutorial itself. Â Pat comes from an academic background with a lot of experience running training sessions and more famously as a co-author of “Running Xen”. His research is interesting because it takes a closer look at using virtual machines (virtual appliances more specifically) to provide a secure end-user system (secure academically, not just something to say in a commercial ;)).
Steve presented next about the Nuts and Bolts of XCP (especially its toolstack – XAPI). Steve has a day job as a systems analyst in an IT network security group at UConn. Perhaps more famously he is the lead developer of Zentific. Xen is his virtualization platform of choice because he can do anything with it. Steve did an amazing job covering the inner workings of XAPI, and why it is a great API. He also showed how easy it is to code against it Â and providedÂ example python scripts. He also described in detail how to use PXE to do automatic installs of XCP and guest VMs. The role-based access control (RBAC) explanation was also very good. (For more information see Marcus’ post on RBAC). Steve’s developer and systems background was a perfect match for the Xen Day as it was co-located with USENIX LISA ’11.
After an interactive demo session from the team – Â installing XCP and doing a live demonstration of some of the XAPI possibilities, Josh West was up next describing a series of enterprise functional areas (Storage, High Availability/Fault Tolerance, Networking, and the Cloud) and their relationship to XCP. In other words, From the Data Center to the Cloud. Josh worked previously at TripAdvisor and set up a really neat XCP test lab for them. Josh’s real-life system administrator experience coupled with his passion for virtualization, the cloud, and Xen/XCP made his presentation of practical, real world use-cases amazing (some oohs and ahhs from the Xen Day attendees!).
Overall it was great to finally see some training material that is primarily focused on XCP!
The slides are available here:
http://xen.org/community/xenday11.html
We did not record the sessions, but we agreed that creating video tutorials and publishing these online later would be the better option. Watch the blog for more details!
Finally, we’d like to also say thank you to Citrix Bedford for providing hardware for use during Xen Day and also TripAdvisor for letting us use their test lab for preparation of the materials. (More on TripAdvisor and Xen Day). See also the video on the Xen Day page, where Ryan Pugatch goes into detail of how TripAdvisor is using XCP and why.

I’ll save the Build an Open Source Cloud details until another day, but until then – my slides here.