Dear Xen Developers,
I wanted to announce that Ian Campbell from Citrix has been nominated and elected as Xen Hypervisor committer and will be responsible for the ARMv7+VE components in xen-unstable. We have seen an increasing number of patches to xen-unstable to enable support for the ARMv7 processor with virtualization extensions: 39 to be precise. So far, the Xen ARM port in xen-unstable is capable of booting a Linux 3.0 based virtual machine (dom0). 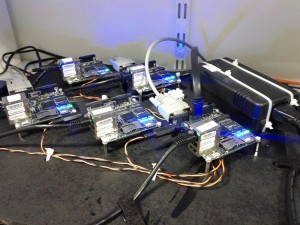 Ian has made a tremendous contribution to the project on which he worked almost since its creation. Ian was was one of the top contributors to the project for the last few years.Â Let me quote a few stats:
2010: 203 patches, changing 13101 lines of code
2011: 305 patches, changing 12225 lines of code
Ian also put together a build farm for the project that utilizes 10 Freescale i.MX53 Loco Quickstart boards (see picture). Besides working on the Hypervisor, Ian has also made significant contributions to the PVOPS project.
Congratulations Ian!