This is a guest blog post by Georg DÃ¶rn, a long-time system administrator and open source enthusiast. Georg founded his company its-doern in 2008, to develop solutions for customers entirely from open source software. 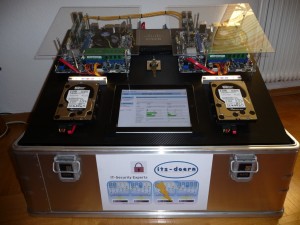 On the right, you see the XEN-HA Cluster which is based on two identical Debian XEN Hosts (Debian Lenny, Xen 4.0.1, Kernel 3.2.16) with DRDB 8.4.1 (1 x SATA Disks and sync with 2 x GBit NICs per Node) and heartbeat 2.1.3 .
The whole system runs with open source software! This XEN-HA cluster is not an experimental system: It works as a video production system for many of our customers.

The video shows you an RDP session in which a Windows 2012 Beta terminal server VM with Univention GPLPV-drivers is running on the XEN-HA cluster. Within the RDP session a video is playing while live migrating the terminal server VM from one XEN-HA cluster node to the other node and back again without any downtime. You will see a very short stop playing the video at 2:22 and 3:55, where only one ping is lost during migration.