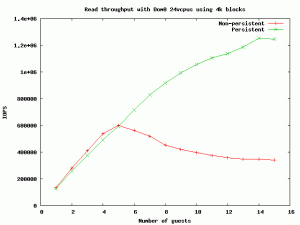 When running more than 6 concurrent guests, there’s a notable speed improvement of the persistent grants implementation, and at 15 guests we are able to perform about 1.24 million IOPS (compared to the previous 340.000 IOPS). As we can see, using persistent grants allows the number of IOPS to scale regarding the number of guests, and the backend is no longer limited by the expensive TLB flush operation. To show a little bit more of information, here is the result of ministat when running 15 concurrent guests, for both a persistent and non-persistent frontend:

It should be noted that persistent grants can be used in the frontend driver even if the backend driver doesn’t support them. In this case, the backend still does unnecessary TLB flushes, but there will still be reduced lock contention, since the front-end is not repeated granting pages to the driver domain. In the following graph we can see the performance of a traditional (non-persistent) frontend and a persistent frontend with a non-persistent backend 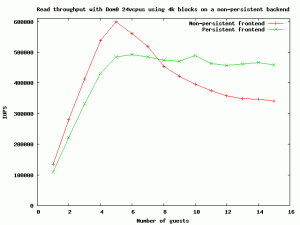 Even if the backend doesn’t support persistent grants, there’s a small speed improvement when using a large number of guests, and the overall performance is much more consistent when using a persistent frontend.
The green function presented in the above graph shows what will happen for exampleÂ when running several guests with a 3.8 kernel (provided that the persistent grant patches finally make it into 3.8) on a driver domain running a 3.4 kernel.
Summary
To summarize what has been said in this article, there are several key points of this new implementation: