The Year in Review : A Tale of Things to Come – Part 1

It is the time of the year, when it is worth looking back and assess how we have done. For me, 2012 has been an exciting year with many positive changes in the Xen community. Not everything, I wanted to achieve has been achieved, but all in all we managed to make excellent progress in many areas.

We have come a long way in terms of governance in the Xen community. Looking back to early 2011, when I started as Xen Community Manager, the developer community largely operated through a set of unwritten rules. This made it hard to join the community as a developer, and may have put off some vendors. Since then we defined our governance model, which formalized values, roles, decision making, the project life-cycle and other areas. A consequence of this was that ownership and responsibilities of tasks have been distributed to community members. We tested the process by archiving old projects such as XCI and through the security vulnerability response process discussion (which still needs to be closed). We also created a forum for distinguished community members (individuals as well as vendors contributing to the project) through the Xen Maintainer, Committer and Developer Meetings, whose main purpose is to solve common goods questions, longer term evolution of Xen and to do more up-front planning. Also, we have a better approach to planning and generating a Xen Roadmap, thanks to George Dunlap who has stepped up as Xen Release Manager for Xen 4.3.
So has this had an effect? If you look at the contribution statistics over the last three years, it clearly has. We have had an increase of larger contributors in the last two years. The same is true as for the PVOPS components in the Linux kernel, too: I will publish a detailed analysis in early January when we have the complete 2012 figures. The analysis will explain the larger than usual Citrix contribution this year (we removed a lot of old unmaintained code which skews the numbers) and look at different metrics related to contributions. 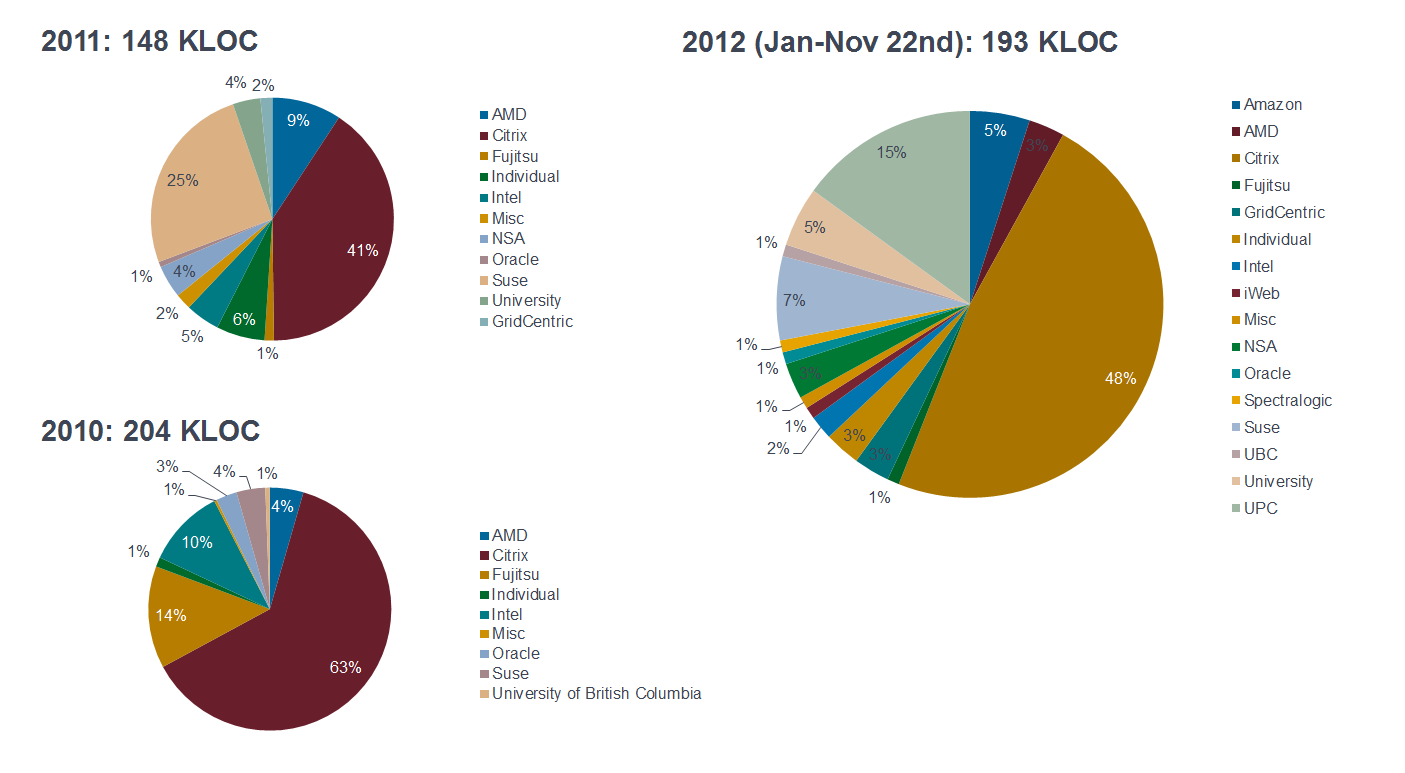 What is missing and next? The next logical step for Xen.org would be to make the step to become a truly independent open source project that is hosted by or associated to an existing open source foundation.

Presence of Xen at open source and industry events has increasedÂ dramatically.Â Xen.org now has a booth and we were present at quite a few open source events. In some cases volunteers have staffed the Xen.org booth, which was a real success, in other cases Xen developers did. Let’s just look at some stats from last year:

When we first, started having a Xen booth at events, we dealt with lots of mis-perceptions and some negativity. For example, many people believed that Xen was not open source, that Citrix was the only contributor to Xen, that there was no open development model, etc. In the last few months, there has been a shift away from this and the majority of conversations are around features, what is coming, why Xen is cool, what we should focus on in the future, etc. 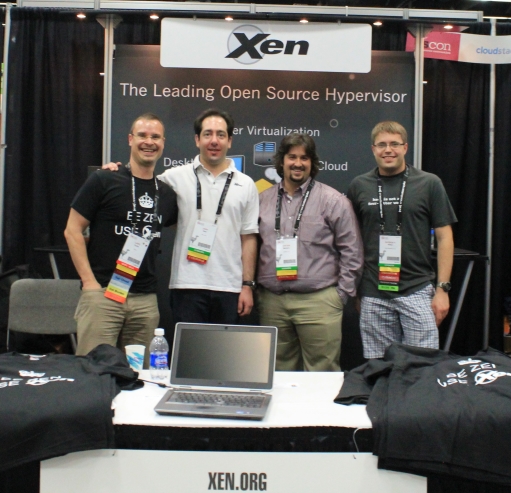 It is not entirely surprising that this has happened. In the past, the Xen community was very inward focused: probably a consequence of Xen’s heritage as a University research project and that for some time, was the only open source hypervisor around and could get away focusing only on developers. What was missing, was sufficient engagement with other projects, the open source community at large and Xen’s userbase. A simple fact in open source is that if you are not where the action is, people either forget about you or misinformation starts to spread.

Going forward, I would like to see more event presence. So if you have something to say about Xen – as a developer or user – submit Xen talks at events in your area. If you can’t afford the travel, it has always been possible for me to find a vendor in the community to sponsor a trip. I expect that in 2013, I will be able to find more opportunities for sponsorship for community members.

Xen is still on top of the Game

Besides the usual iterative changes in performance, scalability, hardware support, etc. the next Xen and XCP releases will sport a number of features that are potentially game changers for Xen.

Anyway, this is enough for today. Watch this space for the 2nd part of the 2012 retrospective, which will cover topics such as Xewn.org Community Initiatives, Xen and Linux, Xen and BSD, Loose Ends and what is coming in 2013!