The Year in Review : A Tale of Things to Come – Part 2

It’s almost 2013! Time to complete our review of 2012. In the first part of this article, we looked at the progress the Xen community made in terms of Governance, Community Diversity, Event Presence and covered cool Xen features that will land in 2013. In this article we will look at some negatives, a review of community initiatives and Xen and BSD/Linux. We will conclude with a brief outlook for 2013.

Despite all the progress, we struggled in some areas. For example, we should have had a new web platform and website by now. In spring we started a project to develop a new xen.org website and lost the developer half way through. For the remainder of the year, I didn’t have the bandwidth to pick up this project and get it finished. I simply underestimated the effort that is required to deliver a new website of that size. On the plus side, we have a vacancy for a Xen Evangelist that I hope will be filled shortly. With the help of the new Evangelist, it should be possible to complete the web site as well as do more community work.
The long XCP 1.5 beta release was a little bit of a disappointment for me. On the plus side, we improved how we managed the XCP 1.6 release, which was by far the best managed XCP release so far. The XCP 1.6 Test Day was very positive and XCP 1.6 downloads have outnumbered those of previous XCP releases. However, the XCP project has some operational and maturity issues. Fixing these issues and helping the XCP community evolve will be a focus area for 2013. 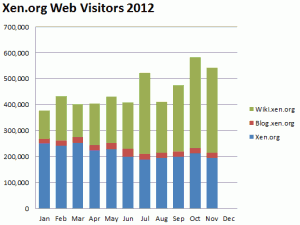 I ran some stats which shows that the popularity of the Wiki has increased by a factor of 3 in a year. This is a clear indicator of the usefulness of the Xen Wiki and the impact Xen Document Days had. Some traffic on the Xen.org site has moved to the wiki: a consequence of moving content from the Xen.org site to the wiki. Overall, the number of visitors to the Xen.org site has increased in 2012.
We experimented with Xen Test Days as part of the Xen 4.2 and XCP 1.6 release cycles. Participation was good: a lot higher than expected for a new community initiative. Many bugs were found, raised and fixed. The next step, is to build Test Days properly into release planning (including planning for maintenance releases). We have shown that the concept of Test Days works in our community, and now merely need to institutionalize the concept.

Another big change in 2012 was our approached to this blog. In the past, the Xen blog was mainly the mouthpiece of the Xen Community managers. You may have noticed that I blog a lot less than I used to. Almost every week, one of the Xen developers gives you an update on what is being developed. Or you get information on how to use a new feature. This has been hugely popular.
I wanted to thank all our authors for their contribution!
The change in emphasis on the blog has allowed us to build relationships with some of the Linux news media, which has a much larger readership than our blog. For example, the series of articles on the PV Spectrum was published on the blog, as well as on Linux.com. Expect more of this type of collaboration in 2013.

I wanted to remind you that writing articles on the blog is open to EVERYONE, who has a relevant story. It can be a user story, your experience with Xen or news about a related project. Also, there is no requirement for a story to be exclusively written for the Xen blog. If you have a Xen related story that you think the community should know about, get in touch!

In the past few years most of our energy has gone into upstreaming Xen enablers and drivers into the Linux kernel. We achieved this in 2011 and necessarily the focus has shifted to improving Xen support in Linux and it’s distros, as well as improved Xen support in FreeBSD and NetBSD. In the extended Xen development team, we have at least one person that works closely with each Linux distro as well as FreeBSD and NetBSD. The goal of this work is to make sure that installing Xen and getting started with Xen becomes really easy. 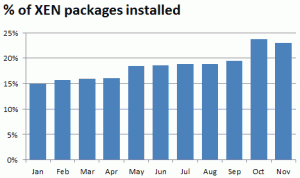 In those distributions, where we have done this well and started early (e.g. for Debian), this already had a positive impact. The Debian PopCon chart on the right, shows that the number of Xen packages installed (relative to the number of people opting into PopCon) has increased significantly.
The same is true for the percentage of Debian users that used Xen packages in the last 30 days. So again, expect more of this in 2013!

It is time to end this article and to wish you all a Fantastic New Year! I am really excited about next year and the cool and good things which are in the making. 2013, will be an exciting year for the Xen projects and Xen.org. There will be more changes that will build on what we have achieved in 2012.
A big thank you to everybody in the community who has contributed to the project in 2012!
Before I sign off, I wanted to remind everybody that next year, the Xen project will be 10 years old. It’s not quite Xen’s birthday yet, but I expect that 2013 will be a fantastic year for Xen (including a fair amount of celebration)!