The Xen Project at OSCON

As in previous years, the Xen Project had a presence at OSCON again. This year, we did not have our own booth: Citrix donated some space to a number of different open source projects in their Open @ Citrix booth and the Xen Project gladly took this offer. Like in the past, we had volunteers helping out at the booth. I wanted to thank Anil Madhavapeddy, George Dunlap, Ian Campbell, Richard Mortier and Russell Pavlicek for their work.

Like in previous years OSCON was very buzzy. We met many existing Xen users as well as people who want to try Xen. We got two Xen related talks accepted into the OSCON program and we got great ratings by attendees. This is a big deal as getting talks at OSCON is difficult, because every project on the planet wants to have a talk at OSCON. You can check out Lars’ community talk here (slideshare) and Anil’s and Richard’s Mirage talk here. Another new thing, is that the Xen Project was approached by media outlets and publishers who specifically singled out the Xen Project to write about Xen. Community members who like writing, get in touch with me now!
OSCON is of course also about parties and networking, of which there was plenty. Of course this meant lots of beer, late nights and some difficult starts the next morning. As we are at beer: as part of the OSCON exhibition the Xen Project hosted a 10 year birthday party with Xen Project beer and cupcakes and a drawing for prizes. Russell did a great job (and as I may say had lots of fun doing so) as the Master of Ceremonies and managed to get people excited and talking about the Xen Project. But enough talking: pictures say more than words. 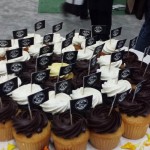 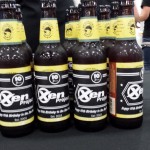 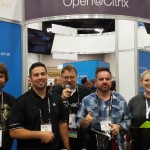 We’ve been working hard on Mirage OSÂ as a Xen Incubator project for some time now, and so were really excited to give it a first public outing at OSCON. Â Mirage OS is all about synthesising extremely specialised guest kernels from high-level code, and so it was a natural step to self-host the slide deck completely in Mirage. Mort and Anil hacked on the slides until the last minute, and ended up compiling a self-contained microkernel an hour before the talk that worked flawlessly (of course).
You can check it the presentation atÂ decks.openmirage.org, and the source code at github.com. Â We were probably the only talk at OSCON doing a “full stack” presentation: a custom version of Xen (with debugging support enabled), a custom microkernel running a fully type-safe OCaml TCP/IP stack, an OCaml HTTP framework, and a reveal.js-based slide deck and a turbo screencastÂ of the slide deck being compiled (how very self-referential!). 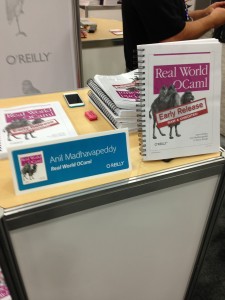 The audience seemed to like the result, and there were good questions about how we planned to turn this prototype into a production-worthy developer framework.Â We’re currently working on stomping out the last few bugs in the tools to get a first developer preview out to start growing the external community more widely. Â The most exciting chat after the talk was with the authors of the RustÂ programming language at Mozilla, and we compared notes on combining the Mirage unikernel techniques with Rust’s runtime.
Mirage is also based on the OCamlÂ programming language, and Anil attended a book signing at the O’Reilly booth that sold out in minutes. Â His new book, Real World OCamlÂ is due to be published later this year, and there were quite a few people who wanted to learn more about practical functional programming. Â Xen uses OCaml in several places in its cloud toolstack, so it was great to be able to point people to the enormous Xen booth right next door when they wanted to find out more about who used the language in industry!
All-in-all, a thoroughly enjoyable and motivational visit to OSCON, and we’re looking forward to showing up with a more mature version of Mirage next year to continue to build the momentum that we’ve started this year.