Last week I was in Edinburgh to attend my first Xen Project Developer Summit. It turned out quite different from my expectations, so I thought I’d share a bit about my experience.
When I first saw the call for participation I wasn’t sure that I had anything sufficiently relevant to contribute that would be of interest to the community. But I decided there wouldn’t be any harm in submitting a proposal for a talk, and it came as a bit of a surprise when I learned that it had been accepted.
My day job is to work on the performance and scalability of XenServer, Citrix’s enterprise-grade virtualisation platform built on Xen. The XenServer engineering team had recently made great strides in improving VM density scalability so it was natural for my talk to be on this topic. The reason for my uncertainty over the relevance of this talk was that it was all about stuff built around the hypervisor and not so much about the hypervisor itself. Evidently I was wrong to assume that this wouldn’t be of interest.
So who’s in the Xen community?
Once my talk had been accepted, I looked forward to attending and seeing what the Xen community looks like. My expectation was that it would be a meeting of the regulars on the xen-devel mailing list verbalising the same kind of discussions as are typically held on there. This wouldn’t have been a bad thing, but I’d have been an outsider on the sidelines, being unable to give or take a lot from this.
But I was wrong. The attendees constituted a surprisingly broad group of people. There were some from academia, others from industry. There were some doing research and others commercialising it. There were some who were hacking on the Xen hypervisor itself and others involved with construction of products built on top of it. 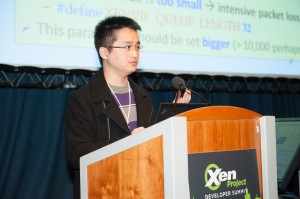 Luwei Cheng talks about his research on TCP performance in VMs

What about the talks?
Compared to similar-sized conferences I’ve attended in other fields of technology in the past, the quality of talks delivered at the Xen Developer Summit was generally very high; I was impressed. And there was an excellent range of presentations, covering a good variety of topics. I was surprised to find that there were many that were relevant to my own work. I was especially interested by talks on:

But it wasn’t all about performance! For those with interest in other topics, there was plenty of content concerning Xen-on-ARM, Android support, GPU integration, security, microkernel VMs, and a lot more.
So I very much enjoyed my first Xen Developer Summit. There was a real buzz around the Xen community. I learned a lot and made some great contacts, and hope that I’ll be able to return to future Summits.