As usual, the first weekend of February (1st & 2nd Feb this year) is FOSDEM weekend. Taking place at “ULB Solbosch Campus, Brussels, Belgium, Europe, Earth”, FOSDEM is the Open Source event of the year. At least for Europe: the website claims that FOSDEM hostsÂ 5,000+ geeks and hackers and 512 lectures!
But it doesn’t stop here: the main wireless network provided (essid FOSDEM) was IPv6 only… as announced in the opening keynote(video at online already!). And in fact it took a while for me to figure out why my Android phone could connect but not get any IP ?!?!
Like 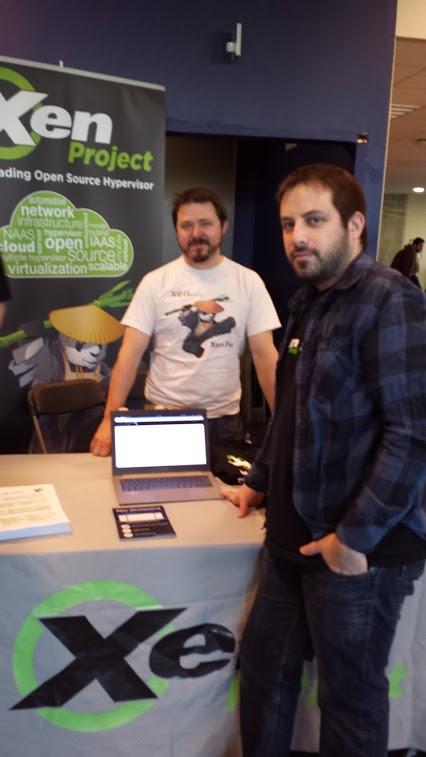 last year, I went to FOSDEM to see all the cool stuff and to help man the The Xen Project booth. Although this time I also had a my own talk to deliver. This was only my second FOSDEM, so this may still be my “nubiennes” talking, but it is really hard to describe how big and amazing the event is. Even more so, if you consider it is entirely run and organized by volunteers. And members of the Xen Project helped organize parts of FOSDEM beyond our booth : Ian Jackson and Tim Mackey were Video Volunteers and Lars Kurth helped organize a DevRoom.
It is amazing to have the chance to choose from such a huge amount of super high quality talks and presentations. It is great to see what the most thriving Open Source projects have to show off at their booths, in the exposition area, and to collect some gadgets. Being one of those, The Xen Project was giving away T-Shirts and some other gadgets, for free (some project use FOSDEM to raise funds). And that, like last year, has been quite a success!
T-Shirts 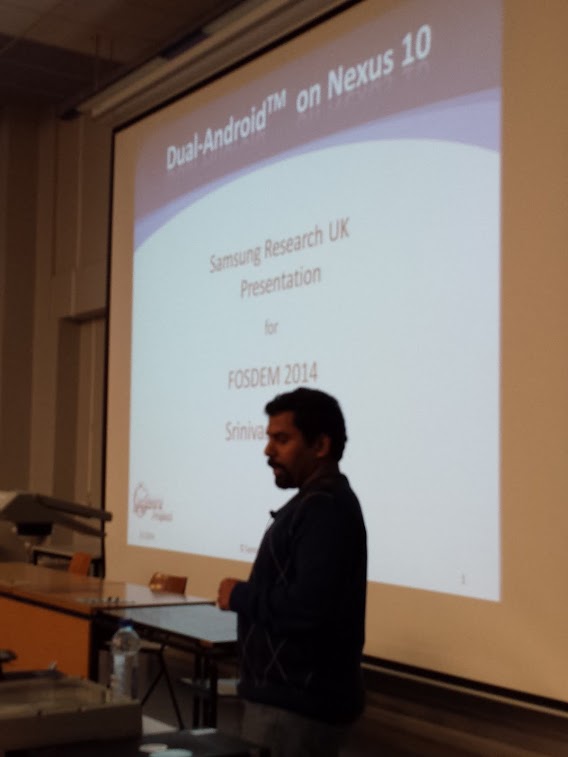 apart, this year we decided we really wanted to do our best to show everyone what Xen is really capable of. That is why we decided to invite community membersÂ to host demos. It was an experiment:Â and it has been a great success! Basically, we invited Xen related projects and or companies that use Xen for their solutions and products, to submit a request for an exclusive slot at the booth. They would then show what they do to FOSDEM attendees. I’m calling it a success because we were fully booked and able to show demos of the following projects: Xen on an Android tablet (a SAMSUNG NEXUS 10), Xen Orchestra, Mirage OS, OSv, Qubes OSÂ andÂ ClickOS. I think we really should do this again next year. I ran the QubesOS demo myself, and it was very pleasant to notice people appreciating what high level of isolation and security this very special Linux distribution provides. It leverages some of the most advanced Xen features, such as stub and driver domains (a couple of people were amazed when I showed them how untrusted PDF conversion works in Qubes! :-D). The presence of two Cloud Operating Systems, MirageOS and OSv (both running on top of Xen, of course) also raised quite some interest. Many attendees were impressed about the responsiveness of SAMSUNG’s solution for virtualizing the GPU in their dual Android tablet demo and the performances and the super quick boot time of ClickOS. Others liked the clean and effective interface of Xen Orchestra. One person even commented that Xen Orchestra looks more impressive than what VMWare provides.
It was great to have the chance to talk with many people that know and use Xen happily and fruitfully, and that were willing to acknowledge all our efforts: technical and not. And of course, to grab a free T-Shirt! Having done pretty much the same last year allows me to run a comparison. There is little doubt that there were more people interested in Xen, and much more awareness about the project doing well and actually expanding (e.g. into embedded and automotive). It was also good, as a developer, to get the chance to talk to users (of any kind) and other members of the Xen community. Like the volunteers showing the demos. For example. I had a great discussion with developers from Samsung about helping them upstream some (at least the kernel and Xen parts) of the incredible work they have done with GPU virtualization on the NEXUS 10. 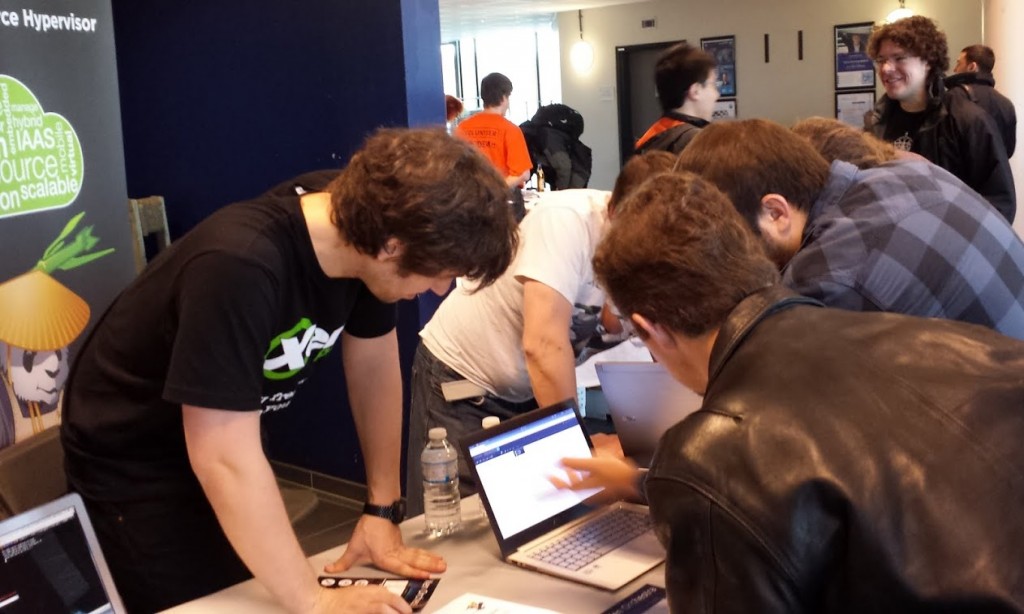 Even when I wasn’t at the booth, there have beenÂ  many chances to hear about Xen, in the various talks given in the Virtualization, BSD and Automotive devrooms, as was announced in this post from some weeks ago. Oh, speaking of the talks, another pretty awesome fact: this year, everything –I mean, every single talk— has been recorded, and videos will be available online soon.
Most of the action, as far as the Xen Project was concerned, happened in the Virtualization & IaaS devroom. Let’s not forget that members of the Xen Project helped record these. A big thank you to them and also a big thank you to the whole FOSDEM video team. Check out out the streams on the FOSDEM website (some are availableÂ already). Of course, videos and slides for the Xen talks will be available on the usual aggregators (vimeo and slideshare). 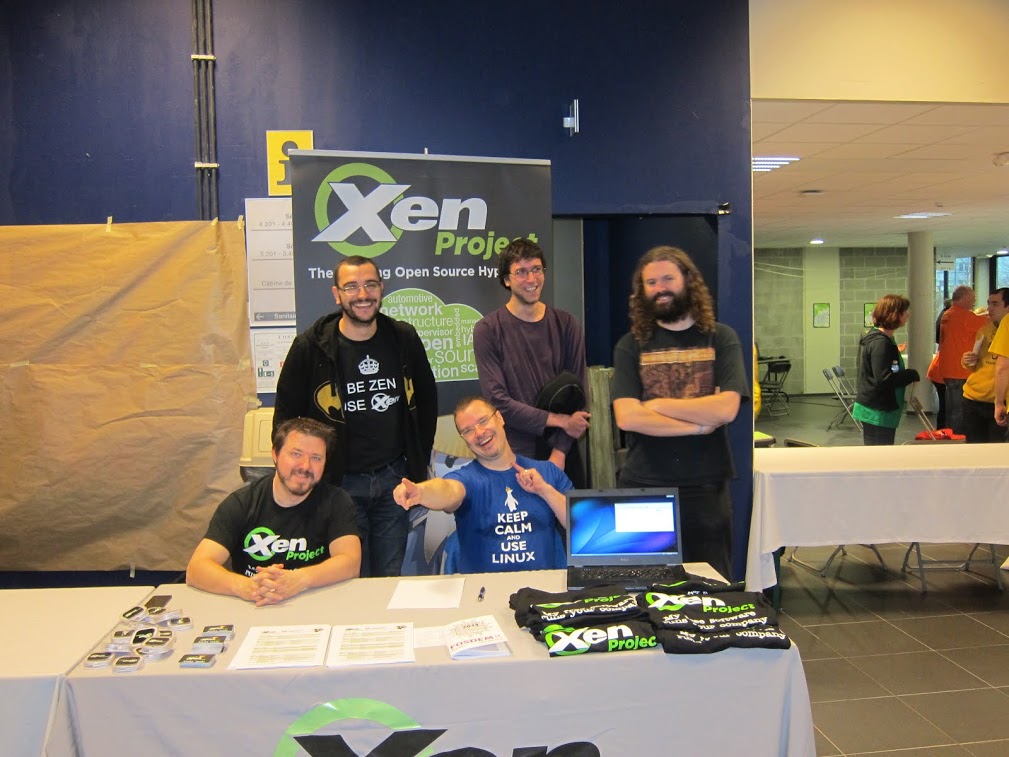 All in all, I personally very much enjoyed having been at FOSDEM. For The XenÂ  Project, I think we really did good in teaming together with all the members of the community and presenting ourselves to current and prospective users in very good shape. Can’t wait for next year!