The first release of Mirage OS back in December 2013 introduced the prototype of the unikernel concept, which realised the promise of a safe, flexible mechanism to build highly optimized software stacks purpose-built for deployment in the public cloud (see the overview of Mirage OS for some background). Since then, we’ve been hard at work using and extending Mirage for real projects and the community has been steadily growing.
Today, we’re thrilled to announce the release of Mirage OS v2.0! Over the past few weeks the team has been hard at work writing about all the new features in this latest release, which I’ve been busy co-ordinating. Below are summaries of those features and links to in-depth blog posts where you can learn more: 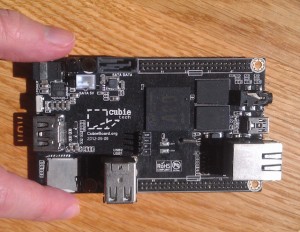 ARM device support: While the first version of Mirage was specialised towards conventional x86 clouds, the code generation and boot libraries have now been made portable enough to operate on low-power embedded ARM devices such as the Cubieboard 2. This is a key part of our efforts to build a safe, unified multiscale programming model for both cloud and mobile workloads as part of the Nymote project. We also upstreamed the changes required to the Xen Project so that other unikernel efforts likeÂ HalVM or ClickOS can benefit.

Irmin – distributed, branchable storage: Unikernels usually execute in a distributed, disconnection-prone environment (particularly with the new mobile ARM support). We therefore built the Irmin library to explicitly make synchronization easier via a Git-like persistence model that can be used to build and easily trace the operation of distributed applications across all of these diverse environments.

OCaml TLS: The philosophy of Mirage is to construct the entire operating system in a safe programming style, from the device drivers up. This continues in this release with a comprehensive OCaml implementation of Transport Layer Security, the most widely deployed end-to-end encryption protocol on the Internet (and one that is very prone to bad security holes). The series of posts is written by Hannes Mehnert and David Kaloper.

Modularity and communication: Mirage is built on the concept of a library operating system, and this release provides many new libraries to flexibly extend applications with new functionality.

All the libraries required for these new features are regularly released into the OPAM package manager, so just follow the installation instructions to give them a spin. A release this size probably introduces minor hiccups that may cause build failures, so we very much encourage bug reports on our issue tracker or questions to our mailing lists. Don’t be shy: no question is too basic, and we’d love to hear of any weird and wacky uses you put this new release to! And finally, the lifeblood of Mirage is about sharing and publishing libraries that add new functionality to the framework, so do get involved and open-source your own efforts.