Less is More in the New Xen Project 4.5 Release

If we used code-names, the Xen 4.5 release should be called Panda on Diet! We have 78K new code with 141K deleted. In effect this release has -63KLOC code than the previous one.

The net effect of a skinnier Xen Project Hypervisor code base is increased usability, simplicity and innovation. This is all by design and one of many steps weâ€™ll continue to take to fine-tune our development and release cycle.

For example, we shed the Python toolstack â€“ including xend which we deprecated in 4.3. This comprised the majority of the code deleted in todayâ€™s release, which is a big boon for developers who now have less code to maintain and can spend more time on new features.

And 4.5 is more feature-rich than any release in Xen Projectâ€™s history. 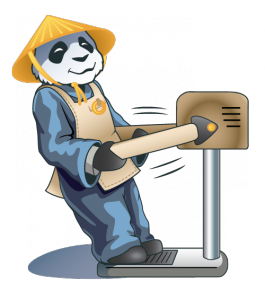 Virtualization and open source are more relevant than ever in today’s evolving, more software-centric data center too. New developments with hyper scale-out computing, Internet of Things, NFV/SDN, and next-generation ARM-based products are driving increased demand for better resource sharing and utilization with enough flexibility to efficiently grow well into the future. What isn’t likely to change anytime soon is the diversity of OSes, multi-tenant architectures, security concerns and storage and network challenges that cloud providers and enterprises must contend with to run their applications. Undeniably, abstraction at the VM level is necessary for superior performance and security in these environments.

Despite these impressive and rapid changes, or perhaps because of them, Xen Project developers are motivated to continually stay ahead of the market with performance, speed, agility and security improvements. Our traditional customers also inspire us; organizations such as Alibaba, Amazon Web Services, IBM Softlayer, Rackspace, Oracle and others are some of the most savvy and innovative users around.
To learn more about the release and for ease of reading, Iâ€™ve grouped the summary of updates into four major categories:

x86 Hypervisor-Specific Updates
On the x86 side, development has focused on improving performance on various fronts:

We also expanded support for:

The ARM ecosystem operates differently than the x86 architecture â€“ in which ARM licensees design new chipsets and features and OEMs manufacture platforms based on these specifications. OEMs designing ARM-based platforms determine what they need on the SoC â€“ that is the System On Chip. As such, they can selectively enable or disable certain functionality that they consider important (or unimportant). ARM provides the Intellectual Property (IP) and standards from which OEMs can further specialize and optimize. Therefore the features Xen Project Hypervisor supports on ARM are not for a specific platform â€“ but rather for functionality SoCs provide. New updates include:

With these new features, the following motherboards are now supported in Xen Project Hypervisor 4.5:

Xen Project software is now using a C-based toolstack called xl or libxl, replacing the obsolete Python toolstack called xend. Â This more modern architecture is easier to easier maintain, and users will not be affected by the move since xm and xl offer feature parity. In fact, the switch greatly simplifies managing Xen instances as other toolstack, such as libvirt are C based and less complex. libvirt and XAPI are now using libxl as well. For more background, check out our new hands-on tutorial â€œXM to XL: A Short, but Necessary, Journey.”

On the libvirt side, changes include:

Xen Project 4.5 will ship with QEMU v2.0 and SeaBIOS v1.7.5 with the following updates:

The 4.5 release also takes advantage of new features in Linux and FreeBSD such as PVH support (which is considered experimental)

With 43 major new features, 4.5 includes the most updates in our projectâ€™s history. Thatâ€™s not even counting 22 new enablers in up-streams (Linux and QEMU). The Project is also taking a more holistic, proactive approach to managing dependencies such as Linux and QEMU, as well as downstream functionality such as libvirt. In 2015, we plan to build on this even further up the stack to include OpenStack and other key projects. For the first time, our Projectâ€™s development process is robust, active and mature enough to systematically focus on these strategic growth opportunities. It also reflects enhanced responsiveness to community feedback; for example, weâ€™re improving usability and performing broader testing for specific use cases with new releases.

During this development and release weâ€™ve seen a steady influx of folks helping, contributing, testing and reporting. As the Release Manager, I would like to thank everybody and call out major contributions coming from AMD, Bitdefender, Citrix, Fujitsu, GlobalLogic, Intel, Linaro,Â Oracle, SuSE and Cavium, as well as several individual and academic institutions.
The sources are located in the git tree or one can download the tarball:

Release Documentation can be found on our wiki.