One of Xen Projectâ€™s highest priorities is to continually work to improve the quality of our code and code coverage. Weâ€™re serious and proactive when it comes to minimising and, whenever possible, eliminating any adverse effects from defects, security vulnerabilities or performance problems. Our users run some of the largest cloud and datacenter operations in the world, so we know that reboots and service interruptions are more than mere glitches in operations.
Thatâ€™s why the Xen Project Advisory Board has made a significant investment to set up a Xen Project-owned Test Lab based on OSSTEST. Weâ€™re excited to announce that the lab is now live and in production.
Our new test lab will allows us to improve upstream quality of the Xen Project Hypervisor, while developers from different organizations now have access to a system that can be used to investigate test failures, schedule test jobs, etc. The test lab is also being used for regression testing of the Xen Project Hypervisor against different upstream and downstream environments. The Xen Project also tests against upstream and downstream open source projects such as the Linux Kernel and OpenStack to ensure that the Xen Project Hypervisor works seamlessly with important key technologies.
To help kick-start the lab, we created the Test Infrastructure Working Group, which helped source a COLO, spec out the hardware requirements for the test system and helped procure the machines needed to run OSSTEST. A special thank you goes to Ian Jackson, who has been instrumental in getting this effort off the ground over the past six months. We also appreciate contributions from our committee comprised of employees from AMD, Amazon Web Services, Citrix, Intel and Oracle, who have worked closely with our maintainers, project leads and wider community to create the new testing facility. As a result, weâ€™ve decommissioned the old system run by Citrix as a service to the Xen Project community.
In this blog, weâ€™ll describe our platform in more detail, identify whatâ€™ weâ€™re doing today with OSSTEST and new goals from our Test Infrastructure Working Group. 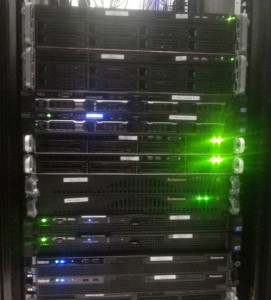 This picture shows a section of our test lab, which is co-located at the Earthlink Boston Data Centre

Currently the Xen Project owns a rack with a mixture of 24 x86 Intel and AMD hosts, and 8 ARM hosts (a custom-made set-up that includes 4 Cubietruck and 4 Arndale boards). Although we are currently only at 50 percent of planned capacity, the new test system has a much more diverse set of test machines and already offers more capacity than the old one did. It is also significantly more reliable than the old system.
Setting up a test lab with several different architectures and suppliers as well as a globally dispersed community is simply a challenge. For example, we discovered a number of bugs in the Linux kernel, FreeBSD and Hypervisor, which are currently being addressed. We also tripped over a number of unexpected issues, such as hardware issues and BIOS bugs in some of the machines in the COLO.