This blog post was written by Dr. Felipe Huici, Chief Researcher, Systems and Machine Learning Group, at NEC Laboratories Europe
Â The team at NEC Laboratories Europe spent quite a bit of time over the last few years developing unikernels â€“ specialized virtual machine images targeting specific applications. This technology is fascinating to us because of its fantastic performance benefits: tiny memory footprints (hundreds of KBs or a few MBs), boot times compared to those of processes or throughput in the range of 10-40 Gb/s, among many other attributes. Specific metrics can be found in these articles: â€œMy VM is Lighter (and Safer) than your Container,â€ â€œUnikernels Everywhere: The Case for Elastic CDNs,â€ and â€œClickOS and the Art of Network Function Virtualization.â€
The potential of unikernels is great (as you can see from the work above), but there hasnâ€™t been a massive adoption of unikernels. Why? Development time.Â  For example, developing Minipython, a MicroPython unikernel, took the better part of three months to put together and test. ClickOS, a unikernel for NFV, was the result of a couple of years of work.
Whatâ€™s particularly bad about this development model, besides the considerable time spent, is each unikernel is basically a â€œthrowaway.â€ Every time we want to create a new unikernel targeting a different application, developers have to start from scratch. Essentially, there is a lack of shared research and development when it comes to building unikernels.
We (at NEC) wanted to change this, so we started to re-use the work and created a separate repo consisting of a â€œtoolstackâ€ that would contain functionality useful to multiple unikernels — mostly platform-independent versions of newlib and lwip (a C library and network stack intended for embedded systems).
This got us thinking that we should take our work to a much bigger level. We asked the question: Wouldnâ€™t it be great to be able to very quickly choose, perhaps from a menu, the bits of functionality that we want for an unikernel, and to have a system automatically build all of these pieces together into a working image? It would also be great if we could choose multiple platforms (e.g., Xen, KVM, bare metal) without having to do additional work for each of them.
The result of that thought process is Unikraft. Unikraft decomposes operating systems into elementary pieces called libraries (e.g., schedulers, memory allocators, drivers, filesystems, network stacks, etc.) that users can then pick and choose from, using a menu to quickly build images tailored to the needs of specific applications. In greater detail, Unikraft consists of two basic components (see Figure 1): 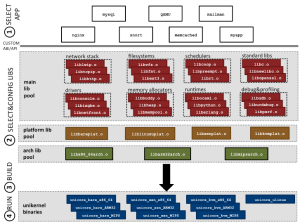 Figure 1. Unikraft architecture.
Getting Involved
We are very excited about the recent open source release of Unikraft as a Xen Project Foundation incubator project. Â The Xen Project is a part of the Linux Foundation umbrella. We welcome developers willing to help improve Unikraft. Whether youâ€™re interested in particular applications, programming languages, platforms, architectures or OS primitive. We are more than happy to build and receive contributions from the community. To get you started, here are a number of available resources:

Please donâ€™t be shy about getting in touch with us, we would be more than happy to answer any questions you may have. You can reach the core Unikraft development team at sysml@listserv.neclab.eu .