Cambridge, UK 8/9/2012 – Xen.org, home of the open source Xen hypervisor, today announced the availability of Xen 4.2, the most advanced open source hypervisor software available. The release is the collective effort of a global development team representing many leading technology vendors, universities, and virtualization experts. This release is the culmination of 18 months of work, 2900 commits and almost 300K lines of code of development effort, by 124 individuals from 43 organizations.

The Xen 4.2 release incorporates many new features and improvements to existing features. There are improvements across the board including to Security, Scalability, Performance and Documentation.

The Xen project continues to work closely with its upstream projects. Of particular note in the Xen 4.2 release cycle is the upstreaming of the HVM device model support into qemu. After the Linux dom0 support (merged upstream in Linux 3.0) the qemu-derived device model was the largest remaining piece of code which required upstreaming. Support for Xen was merged into upstream prior to the qemu 0.15 release and is supported as an option using the XL toolstack. It will become the default in 4.3. Alongside this support we have also gained support for SeaBIOS and Tianocore/OVMF (a UEFI BIOS).

Contributions to Xen 4.2 made to this release by 124 individuals from 43 organizations, not counting contributions to external projects such as the BSDs, Linux or qemu. 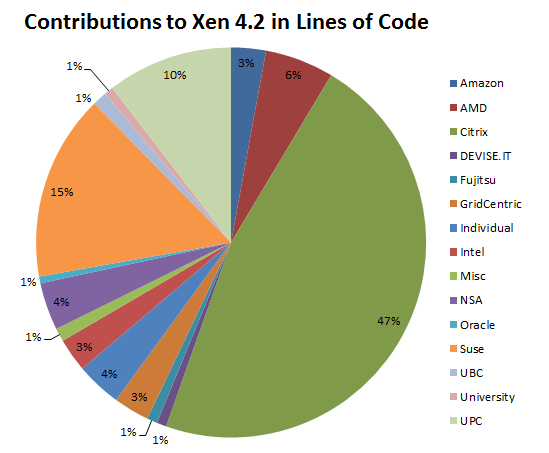 For a complete breakdown of community contributions, see Xen 4.2 Acknowledgements.