Xenproject.org is pleased to announce the release of Xen 4.3.0. The release is available from the download page:

Xen 4.3 is the work of just over 9 months of development, with 1362 changesets containing changes to over 136128 lines of code, made by 90 individuals from 27 different organizations and 25 unaffiliated individual developers.
Xen 4.3 is also the first release made with using the roadmap to track what people were doing and aim for what to try to get into this release, as well as the first release to have consistent Xen test days. This, combined with the increased number of contributors, should make this one of the best Xen releases so far. Read on for more information.

Probably the biggest single feature of this release is the experimental support for ARM virtualization, both 32-bit and 64-bit variants. The 32-bit port of Xen boots on ARMv7 Fast Models, the Cortex A15 Versatile Express platform and the Arndale board (equipped with the Exynos5 SoC by Samsung). It can boot dom0, create other virtual machines and it supports all the basic virtual machine lifecycle operations. Hardware is not yet available for 64-bit ARM processors yet, but Xen is running well in 64-bit mode on AEMv8 Real-time System Models by ARM.
The next headline feature is NUMA-aware scheduling. The scheduler now knows on which nodes a VM’s memory resides, and will preferentially run them there, while still allowing them to run elsewhere if the system is too busy. More on NUMA affinity can be found in Dario Faggioli’s blog on the subject.
Another cool new feature is support for openvswitch as a bridging mechanism. Hot-plug scripts for openvswitch are now included in the Xen tree, so setting it up is straightforward and reliable. See Openvswitch setup for more details.
Another big change is that we will be switching the default qemu from our old qemu fork (affectionately called qemu-traditional) to qemu-xen. qemu-xen will be based on a recent release of the upstream qemu project, plus a small number of patches, mostly back-ports from upstream of fixes and new features. qemu-traditional will still be available.
There are many more improvements and changes under the hood. For a more complete list, see the Xen 4.3 feature list. 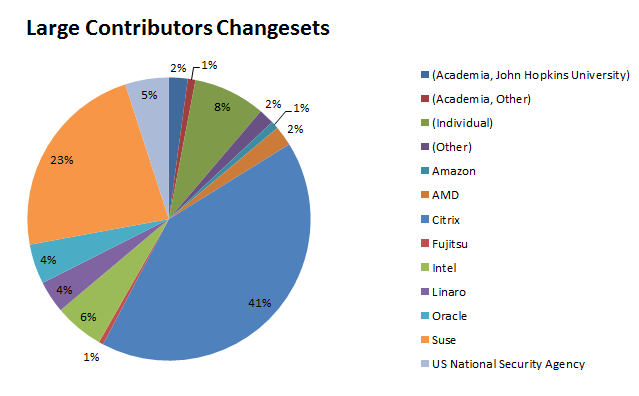