So, here it is what we said up to now. Basically:

So, let’s tackle some automatic NUMA handling mechanisms this time!

Suppose we have a VM with all its memory allocated on NODE#0 and NODE#2 of our NUMA host. As already said, the best thing to do would be to pin the VM’s vCPUs on the pCPUs related toÂ the two nodes. However, pinning is quite unflexible: what if those pCPUs get very busy while there are completely idle pCPUs on other nodes? It will depend on the workload, but it is not hard to imagine that having some chance to run –even if on a remote node– would be better than not running at all! It is therefore preferable to give the scheduler some hints about where a VM’s vCPUs should be executed. It then can try at its best to honor these requests of ours, but not at the cost of subverting its own algorithm. From now on, we’ll call this hinting mechanism node affinity (don’t confuse it with CPU affinity, which is about to static CPU pinning).
The experimental patchset introduced in Part I of this series introduces the support for node affinity aware scheduling with this one changeset here:Â sched_credit: Let the scheduler know about node affinity . As of now, it is all very simple, and it only happens for the credit1 scheduling plugin of the Xen hypervisor. However, looking at some early performance measurements seems promising (see below).
Oh, on a related note, and as a confirmation that this NUMA scheduling thing is an hot topic for the whole Open Source OS and Virtualization community, here it is what’s happening in the Linux kernel about it!

Automatic NUMA Placement, aka “The BrainsBreaker”

First of all, optimally fitting VMs on a NUMA host is an incarnation of the Bin Packing Problem, which means it is NP-hard… So it is something really, really, reaally challenging!! 😛 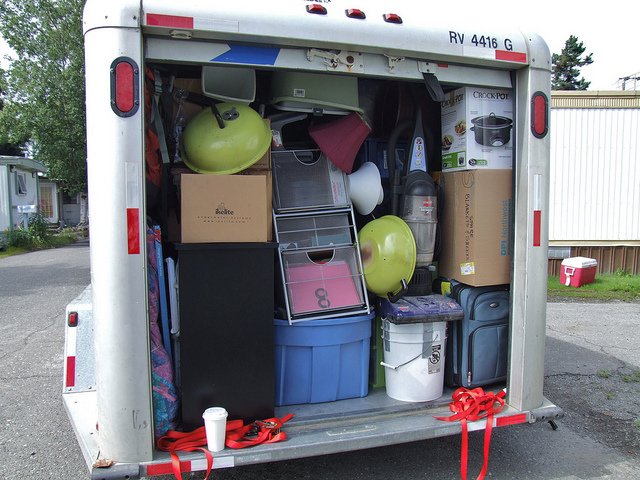 Let’s concentrate just on memory, for now. What if you have a bunch of nodes, each with its own amount of free memory, and you need to decide where a new VM should be placed? (Ok, fine, you may assume the size of the VM is in terms of memory to be known.) We, for example, can look for all the nodes that have enough free memory to host the whole RAM of our VM, but then, which one should we chose? The first we find? The one with most free memory? The one with least free memory? A random one? Moreover, what if we can’t find any of them with enough free space for the domain… Should we try with a set of nodes? If yes, how big? And of which nodes? Well, if you’re guessing that one can go on putting this kind of question all together, then you’re right. After all, that’s basically what NP-hard means!
Point is some choices have to be made, and exploiting a couple of heuristics to get out of the marsh sounds like The Right Thing (TM).Â The very same RFC series mentioned above includes two patches which are trying to put that in place, patch 8 out of 10 and patch 9 out of 10. They introduce three possible NUMA placement policies:

The names comes from the intrinsic characteristics of the three algorithms. In fact, greedy just grabs the first suitable node, packed tends to keep nodes as full as possible while spread tries to keep them as free/empty as possible. Notice that keeping the nodes full or empty should be intended memory-wise here, but that it also imply the following:

“Scientifically” speaking, our greedy here is based on the First Fit algorithm, packed is based on Best Fit and spread on Worst Fit.
The problem of VMs too big for just one node is addressed too, but going into too much technical details is out of the scope of this post.

As it was for the previous post on this, here’s what my NUMA test box has churned out after some days of running SpecJBB2005.Â The setup is exactly equal to the one described in Part I. That is, basically, 1 to 8 count of 4 VCPUs / 1GB RAM VMs running SpecJBB2005 concurrently on a 16 ways / 12GB RAM shared host (drop an eye at the “Some numbers or, even better, some graphs!” section there for more details).
As far as scheduling is concerned, our attempt to suggest the scheduler the preferred node for a VM is at least going in the right direction (For the interested, complete results set isÂ here). The various curves in the graph below represents the throughput achieved on one of the VMs, more specifically the one that is being, respectively: 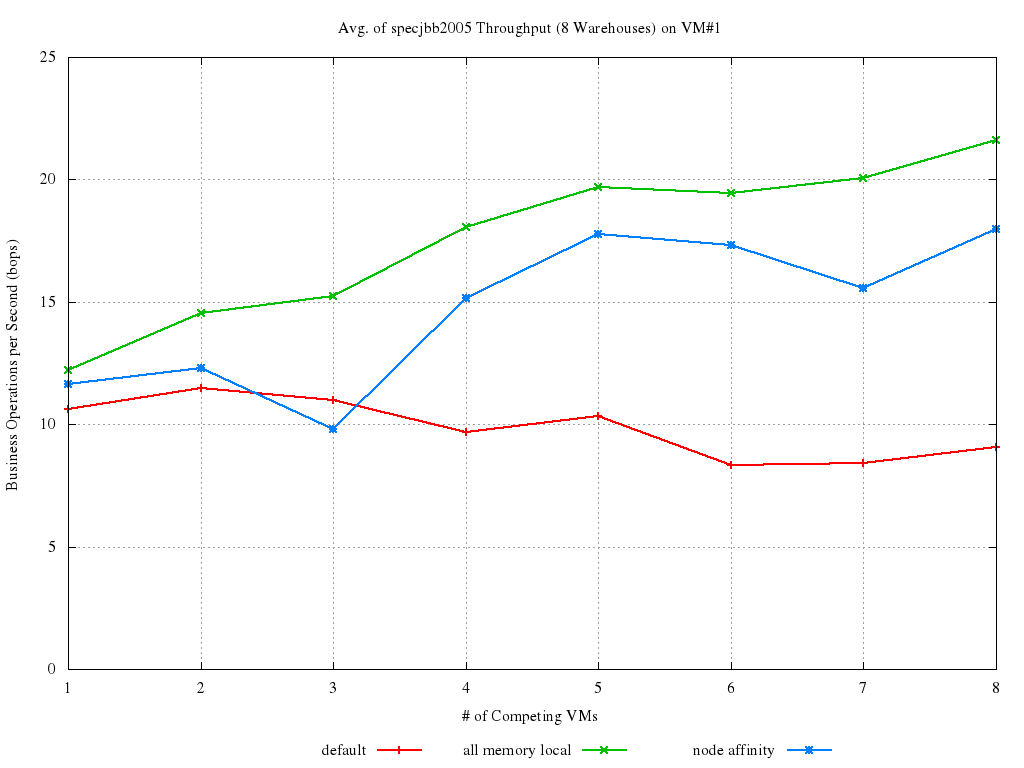 What the plot actually shows is the percent increase of each configuration with respect to the worst possible case (i.e., when all memory access are remote). This means our node affinity tweak increases performance of ~12% to ~18% from the worst case. Also, it lets us gain up to ~8% performance as compared to default behavior, doing particularly well as load increases. However, although it gets quite close to the green line (which is the best case), there is still probably some performance bits to squeeze from it. Note taken for the next release of the patchset. 🙂
For benchmarking the placement heuristics (full results available here), on the other hand, all the VMs have been created asking Xen (well, xl) to use either the greedy, packed or spread policy. The aggregate throughput is then computed by summing the throughput achieved in all the VMs (and averaging the result). 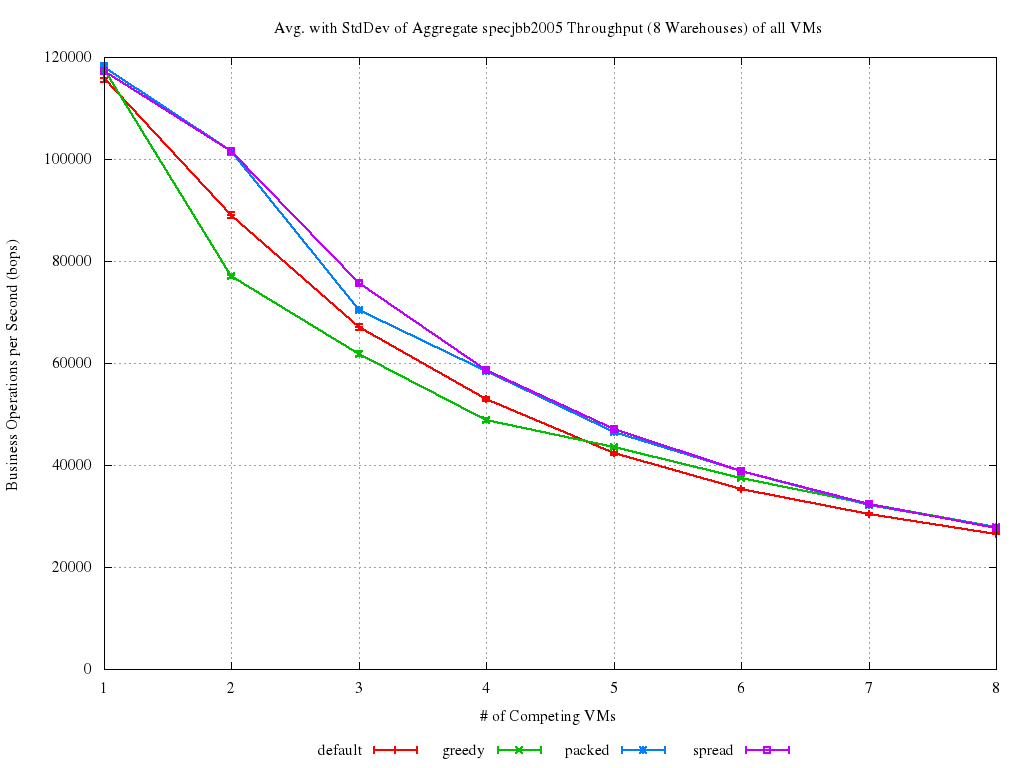 It is easy to see that (in this case) both spread and packed placement works better than the default xl behaviour. That should have been expected, especially for spread, as it manages in distributing the load a bit better. Given the specific characteristics of this experiment, it should also have also been expected for greedy to behave very bad when load is small. In fact, with less than 5 VMs, all of them fit on the first NUMA node. This means memory accesses are local, but the load distribution is clearly sub-optimal. Also, the benefit we get from NUMA affinity seems to get smaller with the increase of the VM count. We suspect this to have some relationship with the CPU overcommitment (starting at 5 VM). We will perform more benchmarks to confirm or contradict that as, again, this is all a work in progress.

Current Status and What’s Coming Next

The mentioned patch series is still young, but it’s getting reviewed and Â a new version is being cooked. At the time of this writing the plan is to keep improving the node affinity aware scheduling, as well as adding VM migration across nodes. That is a very important piece of the whole NUMA support machinery. In fact, it will allow to move all the memory of a VM from a (set of) node(s) to a different one on-line, in case this is needed for any reason (dynamic node load balancing, for instance). The automatic placement heuristics are also being higly restructured, adding more flexibility and putting more factors (e.g., pCPU load) into the play.
Anyway, besides most of the above are developers’ work items for future Xen improvements, we are trying very hard to get at least a snapshot of the automatic NUMA placement in Xen 4.2… Wish us (and yourself!) good luck.